More often than not, relying on a single specialized tool will be better suited for a particular job when compared to using a lot of gadgets and trying to force things to work.

This rang true with the advice that Willson Cuaca, Co-Founder and Managing partner of East Ventures, gave during a discussion between him and Hian Goh, Founding Partner of Openspace Ventures, as well as Hsu Ken Ooi, Managing Partner of Iterative, at this year’s Tech in Asia Conference. Both Cuaca and Goh advised entrepreneurs to focus on the core capabilities of their businesses rather than going through unnecessary cash burn in exploring too many adjacencies or trying to “do everything.”

“If you want to open a coconut, do you want to use one small, very sharp knife, or do you want to use three big, blunt knives? It is very important for the entrepreneur to focus on the core problem and core capabilities. It is okay to be small, but it has to be effective,” said Cuaca.

He called this the “coconut framework,” but he added that durians should also work for the analogy. 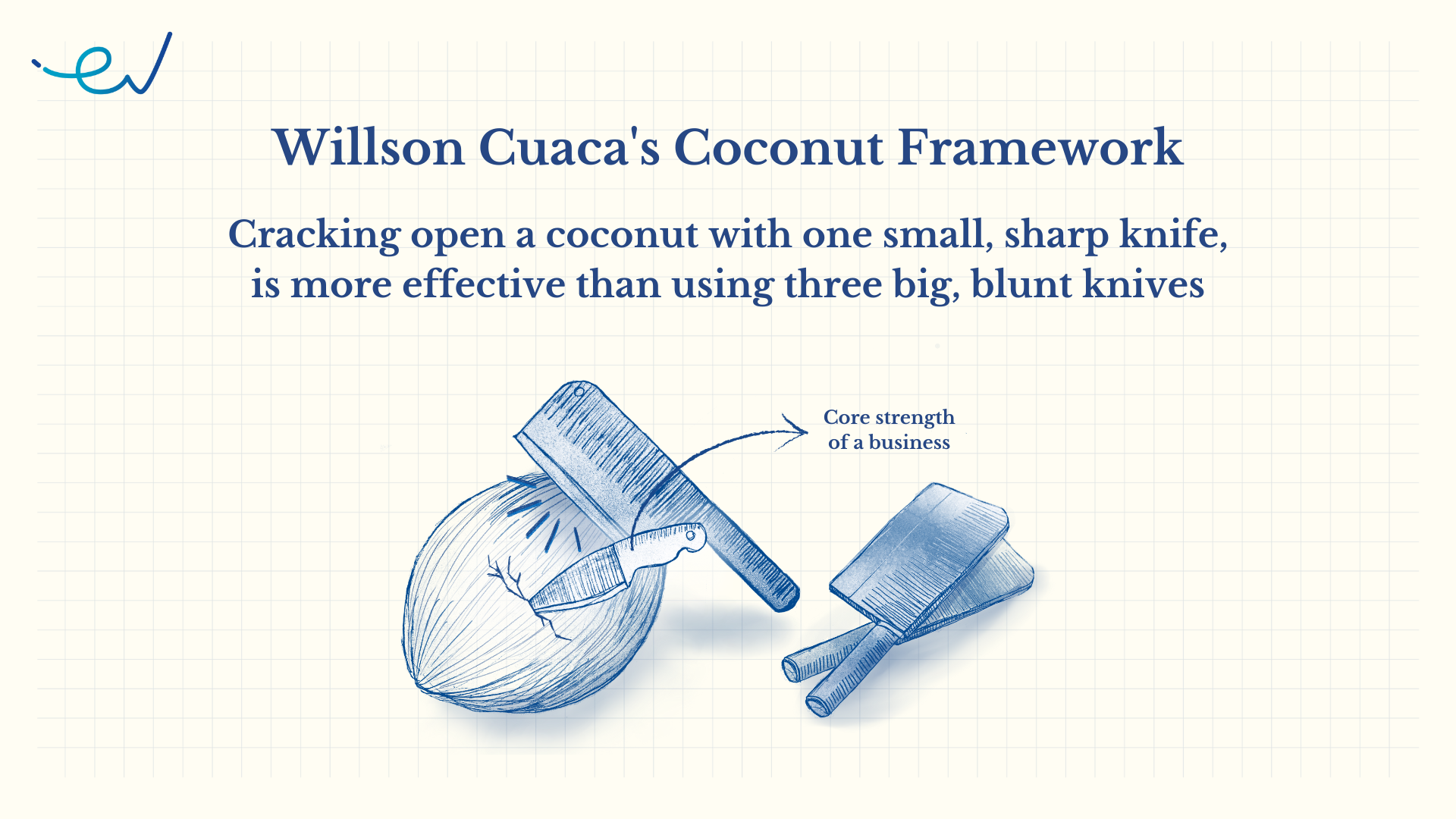 Cuaca shared that over the past few years, he has seen entrepreneurs that are introducing new features each time they are fundraising. “They keep introducing a new knife that can’t crack the coconut. I want my coconut water! Use a small knife that is sharp enough, crack it, peel it, give me my coconut water,” he said.

However, Goh cautioned that there still should be a balance between focusing on core businesses and experimenting with new product fits. “If you stick to your core, you’ll run out of runway and your total addressable market,” he added.

During their discussion, the group also brought up that while there’s a slowdown in funding rounds for startups in Asia in general, it’s not as pronounced for early-stage firms.

“While the growth stage is data-driven and is compared to the public market with valuations having to be adjusted, at the seed level, it is business as usual,” said Cuaca.

“However, if you have raised a lot of money and you are burning, and your unit cost economics are not settled, you will find it significantly difficult to raise that next big-stage round of financing,” said Goh.

Cuaca also noted that the pullback in funding from the region is not new and is just another crisis for entrepreneurs. He likened it to going back to investing and business-building basics. Over the past two years, he has seen founders who sold their dreams and raised as much capital as they can before thinking about the product they want to build.

“This crisis is good because it takes us back to Building Companies 101. You have to show some traction, good unit economics, solving a problem, selling your dreams, then the early-stage investor comes in to help you,” said Cuaca.

However, Cuaca also added that there are currently many profitable companies in East Ventures’ portfolio due to the surge in internet users in the region. This has led to consumer markets being well-educated, lower customer acquisition costs, increased consumer lifetime value and GDP per capita, and improved unit economics.