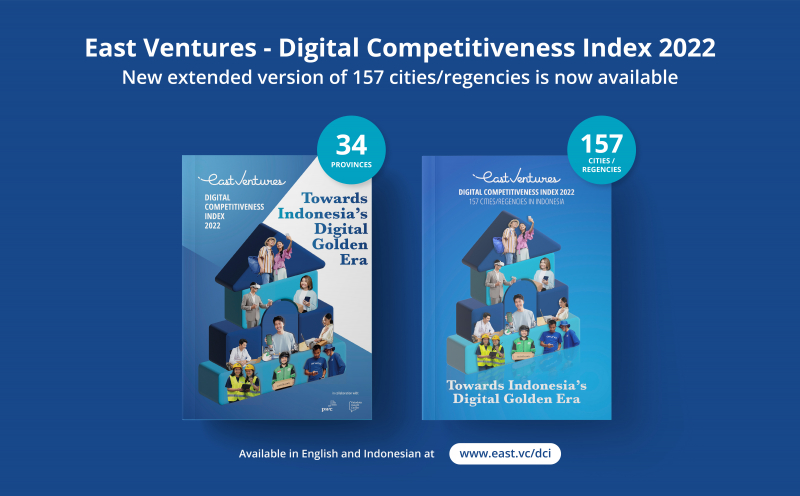 East Ventures, a pioneering and leading sector-agnostic venture capital firm in Indonesia, launched the extended version of East Ventures – Digital Competitiveness Index (EV-DCI) 2022. This extended report is part of EV-DCI 2022 which was launched earlier in March 2022, and it provides in-depth information on the digital competitiveness among 157 cities/regencies in Indonesia.

“After the launch of the EV-DCI 2022 report earlier in March, we are excited to provide the extended version with the breakdown of 157 cities/regencies in Indonesia. This report provides even more detailed information on how each city/regency has been contributing toward digital inclusion and digital competitiveness in Indonesia. This report aims to highlight the success of certain sectors and identify areas of improvement in order to accelerate Indonesia’s digital competitiveness,” said David Fernando Audy, Operating Partner of East Ventures.

THE DEVELOPMENT  THE DIGITAL COMPETITIVENESS IN CITIES/REGENCIES IN INDONESIA

Moreover, the spread value between the highest performing city/regency with the lowest is also getting narrower, which indicates the decrease in the digital competitiveness gap. In 2020 and 2021, the gaps between the top rank and the bottom rank were 52.2 and 48.2 respectively. This year, the gap decreased to 47.3. This finding also indicates that the middle and bottom groups are continuously growing and catching up to the top-ranked cities/regencies.

Other cities/regencies outside the Jabodetabek region steadily show improvement in their digital competitiveness. Aside from Yogyakarta City with the remarkable rise from 9th (2021) to the 3rd (2022), Sleman Regency climbed up five places to the seventh position, marking them as the best performing regency. Outside of Java, one of the cities/regencies undergoing a sharp increase is Bengkulu City which climbed 28 places and became the 14th position.

These increases are propelled by significant score improvement in the field of human resources (HR). Apart from the HR pillar, Yogyakarta City increases in the manpower pillar, Sleman regency increases in the ICT expenditure, and Bengkulu City is supported by infrastructure and ICT usage pillars.

In providing the understanding of the rank downtrend and growth, David commented, “The up and down movement in the ranking is reflecting growth ranking of every city/regency.”

The pandemic has presented an immense dynamic that changed the digital economy landscape in the past year. Entering its third year, the digital economy growth across 34 provinces and 157 cities/regencies is presented in the form of index disclosure; which comprises digital infrastructure readiness, human resources, digital economic activities, and provincial government policies.

EV-DCI 2022 serves as a reference for the stakeholders (the government, investors, academics, and business players) to map and set strategies for Indonesia’s digital golden era. These strategies are depicted in building blocks that form like a house where ICT infrastructure becomes the foundation that will facilitate the equitable growth of the digital economy in Indonesia.

The house is supported by three digital pillars: digital government, digital society, and digital business sectors. First, the digital government pillar needs to focus on efficiency and transparency. Furthermore, in building a digital society, it needs to be supported by the education system improvement and upskilling of digital talent while focusing on the growth of digital technology adoption in various economic sectors. Subsequently, these aspects need to be strengthened by implementing sustainability principles through Environmental, Social, and Governance (ESG) to maintain the digital economy growth in the long run.

“East Ventures is committed to being at the forefront along with the other stakeholders in accelerating the digitalization in achieving a greater digital ecosystem. With all the growth that we have experienced, we are bullish to welcome Indonesia’s digital golden era soon,” closed David.