Growing up in Bandung, Brian Marshal, Founder and CEO of SIRCLO has come to notice one thing pertaining to the retail business. His hometown, Bandung in West Java, is known as the shopping destination, especially with its famous factory outlets spread all over the city. Offline shopping was the thing and people would spend hours shopping just to live every bit of the experience.

Today, as technology becomes an inseparable part of lives, many brand owners from Bandung have become very digitally native; selling their unique products beyond the Paris Van Java.

“While computing was still seen as a far-fetched and advanced field back then, it has been particularly fascinating in witnessing how it has evolved today and becoming an integral part of everyone’s lives,” said Brian. “We have become so accustomed to using technology for almost everything we do on a daily basis, that technology has become so intuitive.”

The digital transformation in retail is not exclusive to Bandung. Indonesians in general have become increasingly acquainted with e-commerce, especially since the pandemic forced massive digital adoption.

The growth of e-commerce enabler

The shift to online retail in Bandung has inspired Brian to start his own company in 2013. SIRCLO started out by observing many entrepreneurs and business owners who started to run their own small businesses. Most of them sold their goods through social media, which then didn’t offer a reliable platform for brand owners to sell their products and run a business online.

Since its founding, SIRCLO has evolved with the same mission of helping brands sell online. They offer various solutions. First, SIRCLO Store, a Software as a Service (SaaS) platform that creates affordable template-based online stores for Small and Medium-sized Enterprises (SMEs). SIRCLO Store’s platform has now evolved to facilitate a multichannel management platform that is also equipped with an integrated dashboard and third-party integration for shipping and payment gateway.

Second, SIRCLO Commerce, a Channel Management Solution (CMS), that has helped enterprise brands to enter online marketplaces since 2017. It leverages technology to synchronize sales across multiple channels and is also equipped with e-commerce fulfillment capabilities.

In the past two years, SIRCLO has sought opportunities for growth and to expand the range of solutions offered to brands strategically through omnichannel strategy — a seamless integration between online and offline sales for brands to consumers. In 2020, SIRCLO and ICUBE merged with the purpose of providing more comprehensive technology and e-commerce services to a wider market in Indonesia. One year later, SIRCLO acquired Orami, the largest Indonesia’s parenting platform to boost social commerce’s potential through the latter’s large network of community. A group picture of SIRCLO, Orami, and East Ventures team members after a townhall announcing Orami’s acquisition by SIRCLO in April 2021 (Photo courtesy of SIRCLO)

Despite the rise of e-commerce users, Brian argues that Indonesians have a fondness for shopping at offline outlets, even as a means of refreshing. When they do opt for online shopping, there’s another challenge on the logistics side of things, as the infrastructure is yet to be adequate to deliver a uniform online shopping experience across the nation.

Digital economy activities in Indonesia are mostly concentrated in Jakarta and other provinces in Java. As of April 2021, the majority of SMEs who utilize SIRCLO’s SaaS services are based in urban regions, including DKI Jakarta (40.5%), West Java (21%), East Java (7%) and Central Java (6.5%).

Despite the current gap between Java and outside Java, demands from areas beyond Java and Bali have been gradually increasing over the years, typically boosted by seasonal peaks (e.g. online shopping festivals). In 2017, customers in Java’s urban centers (i.e., Greater Jakarta, Bandung, Surabaya and Semarang) contributed about 70% of Indonesia’s e-commerce spending, while the rest of Indonesia (non-urban regions both in and outside of Java and cities outside of Java) contributed 30%. By 2022, e-commerce spending in Indonesia is predicted to be equally distributed between Java cities and other Indonesian regions, according to a report by SIRCLO and Ravenry in 2020.

EV-DCI 2021 analysis also shows that there has been an improvement in the growth of digital infrastructure, exemplified by the median score on national level increasing to 54.29, an increase of 7.54 from the year before. This indicates that, on the national level, the ICT infrastructure is getting better, which will help boost the growth of the digital economy including e-commerce.

To tackle the challenge pertaining to logistics, SIRCLO aims to strengthen strategic partnerships with logistics companies. “As a fulfillment business, we also aim to open up additional fulfillment centers on more strategic locations to accommodate the increasing demands, letting technology and distribution retail sites work in synergy at the brands’ and consumers’ favor,” said Brian.

Furthermore, SIRCLO has established Business Development Teams in multiple cities (Yogyakarta, Surabaya, and Bandung) to strengthen its capabilities outside Jakarta, providing brands more direct touchpoints with their services. In addition to that, SIRCLO has also been actively involved in various workshop programs to extend its mentorship beyond the company. Through one of its partnerships, SIRCLO taught branding to entrepreneurship major students in Ende, Flores, in East Nusa Tenggara province. 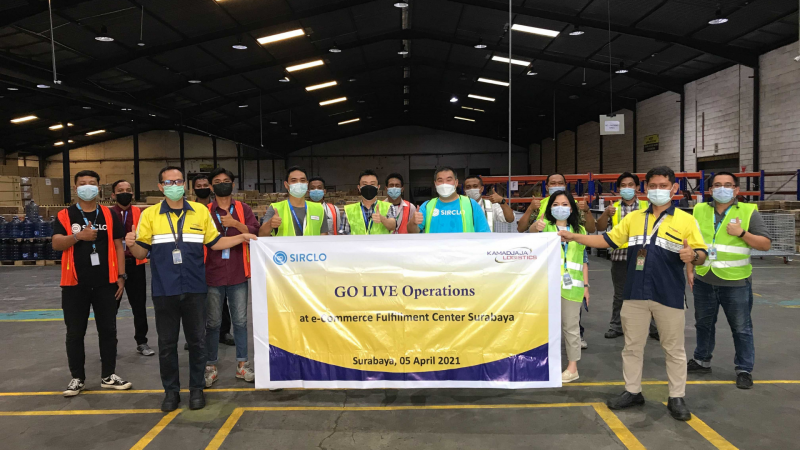 A number of SIRCLO Store users have been able to sell to foreign markets, such as Bohobaby and Bigissimo. Through the strong online presence they nurture on their digital platform, they are able to cross geographical boundaries and have their products be well-known in multiple countries.

“We hope to hold a position where we play a contributing role to the nation’s economy from within. We believe our roadmap to making this happen is by helping SMEs reach wider consumers, drive their product development, and achieve sustainable business expansion through e-commerce,” said Brian. He believes that providing an ecosystem for brands to reach the heart of the consumers nationwide can support and boost the Indonesian digital economy.

Aligned with its mission to help brands sell online, SIRCLO aims to empower communities alike through training and the right solutions to develop their business digitally, such as through SaaS or even championing social commerce, which emphasizes on community. Remote areas have explorable business potential, but typically no branding to support it. SIRCLO’s workshops hold the purpose of empowering them in bringing their business forward and eventually expand their customer base.

“SIRCLO has contributed significantly in narrowing the gap of digital economy between provinces, as it helps to enable more regional SMEs products to participate in online retails at national e-commerce level. Hence, with more e-commerce adoption by regional SMEs, we expect to see more distributed and improved EV-DCI index scores going forward, which means that the digital competitiveness in other left-behind provinces will continue to catch up. We believe that digital inclusiveness is a key ingredient in accelerating Indonesia’s digital economic transformation,” said David Fernando Audy, Operating Partner of East Ventures.