Hendry Lieviant, Co-founder of Komunal, recalled a remarkable experience from his high school year in the capital city of East Java, Surabaya, where he was able to pay for his school fees through ATM transfer. The cashless transaction made it easier for both himself—lest he lost the cash—and the school office to track and manage. Technology has since developed into a digital lifestyle where Hendry could finally do the things he could only imagine before: booking transportation services, paying for accommodations, or even buying a cup of coffee just by the touch of his finger. Although the adoption of the digital economy has increased tremendously outside Jakarta, he realizes that there is still a wide financial gap in Indonesia. For instance, there was a huge credit gap in early 2018 where Indonesia’s MSMEs credit gap reached US$ 70 billion per year, despite the massive growth of its banking and microfinance sectors.

This situation called for Hendry and his peers, Kendrick Winoto and Rico Tedyono to give birth to Komunal in 2018 with one vision in mind: to accelerate the country’s financial inclusion by eliminating the aforementioned gap.

Komunal seized the opportunity of the growing trend of fintech lending in Indonesia, and the COVID-19 pandemic has opened up even more opportunities for fintech lenders, according to East Ventures Digital Competitiveness Index (EV-DCI) 2021. As a fintech company that provides P2P (peer-to-peer) services in Indonesia, Komunal is committed to form relationships between potential MSMEs and funders across the archipelago.

Komunal provides much easier, simpler, and more accessible processes of capital loan applications for MSMEs, one of the sectors that is severely impacted by the crisis. In doing so, Komunal helps revive MSMEs’ role as a backbone of Indonesia’s economy. In 2020, Komunal has disbursed US$ 50 million of loans to hundreds of MSMEs in Indonesia.

Managing a P2P lending business however, is not an easy task either, as Komunal has to simultaneously balance both supply (lenders) and demand (borrowers) to facilitate the transactions. “The challenge is how to solve seemingly intricate chicken and egg problems. The changes between lending and funding needs are very dynamic. Hence, the team needs to be more agile and to have strong teamwork, in order to eliminate bottleneck processes timely,” said Hendry.

Since its inception, Komunal has aimed to combine best-in-class credit methodology, alternative data and technology, as well as community partnership with existing rural banks (Bank Perkreditan Rakyat / BPR) and cooperative loans (Koperasi) to improve the funding access to Indonesia’s MSMEs. This strategy has also been backed by the Financial Services Authority (OJK), who issues regulations regarding digital banking services, to promote collaborations between banking players and fintech players.

When the COVID-19 pandemic migrated to Indonesia, these collaborations accelerated to an even higher level as online loan applications from MSMEs in Indonesia rose. According to OJK records in EV-DCI 2021, online loans have increased monthly ever since the pandemic, reaching US$ 9,5 billion in October 2021. Hence, collaboration among players in the financing ecosystem becomes pivotal to strengthen the capital capacity of each institution.

P2P business model combined with extensive collaboration enable Komunal to minimize the financial gap and improve the quality of economic growth through better financial inclusion. In fact, Komunal users (lenders and borrowers) are distributed in every province in Indonesia.

Although most Komunal users are still mainly concentrated in East Java, DKI Jakarta, and Central Java, their services are also accessible to the users residing outside Java, for instance South Sulawesi and North Sumatra, which are not in the top 10 ranks of EV-DCI 2021. It is more apparent that Komunal’s presence helps expand access to financial services through technology, making digital competitiveness between provinces more even. 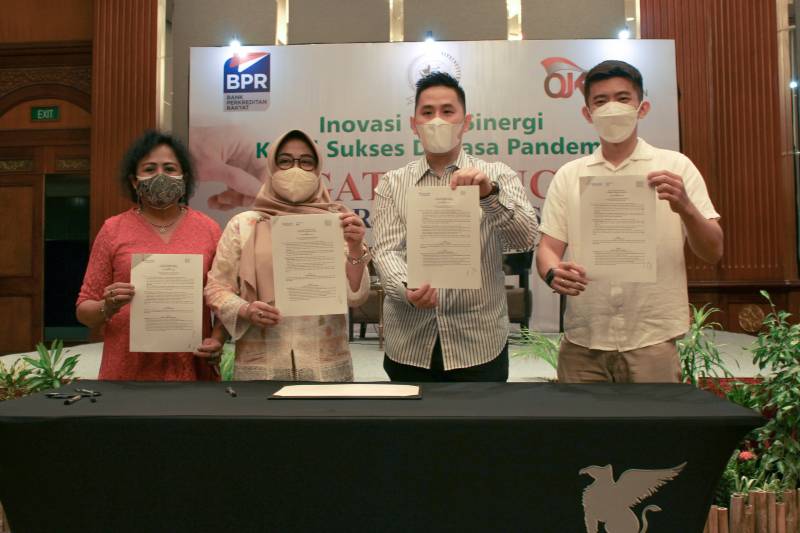 Indonesia has 1,500 rural banks across the archipelago. Having their foot on the ground, collectively they have big potential to boost Indonesia’s financial inclusion since only less than 40% of Indonesia population have credit data. Unfortunately, lack of digitalization and innovation have rendered them less effective. They often have difficulty attracting deposits as more than 95% of the country’s depositors reside in urban areas, despite the fact that the government guarantees the ceiling rates of 2.5% higher than commercial banks.

As the digital economy continues to thrive, the rural banks community began to feel left behind and ponder whether this business is becoming a sunset industry. While some of these rural bank owners are well aware of the need to change and adapt to this digitalization, most of them are not. Thus, Komunal is committed to involve rural banks into their ecosystem with their latest innovation: Deposito BPR, a platform where deposit transactions can easily be made online.

Deposito BPR was officially launched on October 13, 2021. Through Deposito BPR, Komunal introduced the new concept of “neo rural bank” to upgrade and equip smaller banks with advanced capabilities. The company digitalizes rural bank’s fragmented processes: replacing handwritten signatures with digital signatures, enabling eKYC (Know Your Customer), and launching e-bilyet. All of these have never been done before in rural bank history. The platform lowers the cost of acquisition for rural banks which in turn might lower the cost of credit for borrowers in suburban areas.

OJK has been a huge devotee in strengthening the fintech lending sector. Apart from collaborations, OJK has vigorously done open dialogues between the authorities and fintech lending firms. As a form of support, OJK has also recently released an official license for Deposito BPR [License No.: S-178/MS.72/2021], making Komunal Indonesia’s first authorized funding agent. The license grant marks another significant step of Indonesia’s financial institutions to boost the country’s financial inclusion tremendously. It also means that Deposito BPR becomes the “first of its kind” product that includes rural banks in its ecosystem.

Since Deposito BPR first launched its beta version, some rural banks have sailed on-board and felt the overwhelming impact. Collectively, they have received 10 billion rupiah of deposit, all without face-to-face meeting. The platform has since received numerous positive testimonies.

“Supported by cutting-edge technology, this collaboration benefits rural banks greatly as it promotes rural banks to an even wider range of audiences. Not only that, Komunal is very helpful for both lenders and borrowers. Overall, I’m very satisfied with the services offered by Komunal,” said Renny Wulandari, Director of BPR Surya Artha Utama. Meanwhile, Lilis Warsiyah, Director of BPR Kawan reviewed, “The whole process of loan request until loan disbursement is very fast. This is absolutely helpful for business owners when they need emergency funds. It is also guaranteed by LPS (Deposit Insurance Agency) and safe for the rural banks.” Komunal’s mission doesn’t end here. Looking forward, Hendry and his peers still have a lot of homework to complete. Komunal aims to keep collaborating with OJK and BPR Association in each region, leveraging innovation and technology in the process while also spreading more awareness towards a bigger market, such as providing educational content through social media and empowering macro and micro influencers, while making further improvements to Deposito BPR. That way, Komunal will be able to partner with more rural banks outside East Java.

“Every day, we always look for new ways to positively impact and contribute to Indonesia’s economic growth. Financial services are the lubricant and lifeline of the economy, as fintech strives to democratize and enhance the efficiency of these processes. Essentially, it improves financial inclusion and the economic well-being of all Indonesians,” concludes Hendry.