As it relies heavily on tourism to support its economy, Bali is one of the provinces hit hardest by the COVID-19 pandemic. However, the crisis became a springboard for a digital leap in the Island of the Gods, allowing Bali to break through the domination of Java provinces in the East Ventures Digital Competitiveness Index 2021 (EV-DCI 2021).

East Ventures Digital Competitiveness Index 2021 report shows that Bali ranks at 4th place in terms of digital competitiveness. Bali is the province with the highest score increase from 2020 with 7.1 point.

One of the key factors behind Bali’s high digital competitiveness is infrastructure readiness. Bali’s digital infrastructure ranks the second-highest nationally with 82.42, only behind DKI Jakarta. Bali also scores high in terms of the use of information and communications technology with 78.1 points, placing the province at 3rd highest nationally.

However, the main factor behind Bali’s digital leap last year is not infrastructure nor ICT use. The two factors did not experience a jump from last year. Instead, the biggest increase happened in the Entrepreneurship and Productivity pillar, which measures the use of the internet for work and the level of electronic transaction. Bali’s EV-DCI score in Entrepreneurship and Productivity increased from 14.41 in 2020 to 29.36 in 2021. Judging by the number, there has been a massive digital economic transformation in Bali.

The force of the pandemic

After three years showcasing macrame products through door-to-door marketing and in expos, Dewanti Amalia Artasari decided to open her own store: Dewa Collection Bali. Amalia rented a place in Seminyak, a spot famous for international tourists, and opened the store in January 2020 — just two months before COVID-19 pandemic first cases were first found in Indonesia and devastated Bali’s economy.

“Door-to-door sales were exhausting, and the profit margin was thin, that’s why I opened a store. But then the pandemic happened. I was exasperated,” said Amalia.

Having no other choice, Amalia moved her store to Tokopedia. She was not a stranger to e-commerce as she had tried selling on online marketplaces when she first started her business. However, at that time, there was barely any sale in the first month. Amalia then decided to turn her focus offline.

Due to the pandemic, Amalia renewed and completed her online catalog, with pictures and descriptions as well as details about materials and the design. She also spent more time answering customers’ questions.

The result is encouraging. Now Amalia’s online store receives 10 orders on average every day, which is quite a jump from 10 orders per month that she received offline. Her revenue is now around dozens of millions. The pandemic also hit entrepreneurs with larger-scale businesses than Amalia. Heritage beauty and care Bali Alus also suffered from the absence of tourists in Bali, as their main buyers are spas and hotels which cater to tourists.

The founder of Bali Alus, Ni Kadek Eka Citrawati, said that the declining sales in white-label market and offline stores forced her to focus on sales from online marketplace. While having been on Tokopedia for 7 years, Bali Alus’s online presence was largely shadowed by its offline sales.

“Without focusing on the marketplace, our sales would have been devastated. Now our sales are 3 times that of our pre-pandemic level,” said Citra. Bali Alus now relies heavily on online channels, which contribute to 70% of total sales from previously at 30%.

Dewa Collection and Bali Alus are just two out of thousands of micro, small, and medium enterprises (MSMEs) in Bali that turned their focus to online marketplace due to the pandemic. According to the Director of Public Policy and Government Relations of Tokopedia, Astri Wahyuni, digital platforms enable MSMEs to maintain or even grow their business. Bali is one of the provinces with the highest increase of businesses in Tokopedia amid the pandemic.

Tokopedia’s internal data shows that as of February 2021, there are more than 10 million of merchants in Tokopedia, which means an increase of 2.8 million from 7.2 million merchants in January 2020. LPEM FEB UI, a research institute that is a part of University of Indonesia, reported that Tokopedia merchants who come from Bali increased by 66.2% in 2020, which was the highest nationally, followed by DI Yogyakarta (42,2%) and DKI Jakarta (28,3%).

The Head of Bank Indonesia’s Representative Office in Bali, Trisno Nugroho, argued that this increase was caused by the low level of digitalization and online marketplace adoption among MSMEs in Bali before the pandemic. According to Trisno, there was a perception that businesses in Bali did not have to go the extra mile since millions of people were coming to the island instead.

“The tourists come to Bali, visit the boutique in Seminyak and Canggu, and pay in cash. For more than 50 years, the market has come to Bali. We can understand that the MSMEs have been in their comfort zone for a long time,” said Trisno.

Bali Tourism Board reported that the number of foreign tourists in Bali fell from 6.3 million in 2019 to 1.1 million in 2020, while domestic tourists fell from 10.5 million to 4.6 million within the same period.

Trisno said that the move to the online marketplace happened alongside the rising adoption of digital payment methods among MSMEs and residents. After a year of struggling to encourage the adoption of QRIS among Bali’s entrepreneurs, Bank Indonesia’s Bali representative office saw a jump in QR code-based payment system in 2020.

“Amid the pandemic, the merchants could no longer wait for customers and hard cash in physical stores. With QRIS, they can continue commerce virtually. Now that these merchants have experienced the benefits of digital payment, with bigger profit, I don’t think they will ever leave the tech ecosystem,” said Trisno. 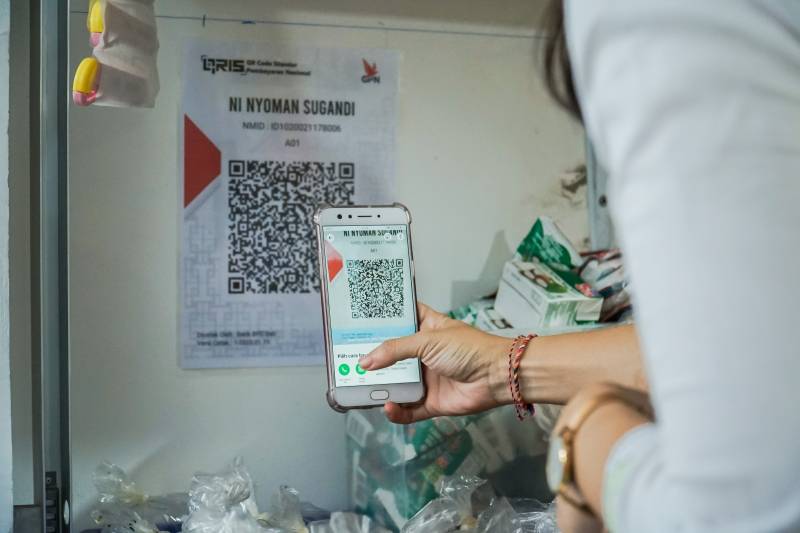 Trisno of Bank Indonesia’s Bali office believed that digital payment adoption is just the beginning. After becoming comfortable with the system, both consumers and merchants in Bali will be interested in trying out other technology features such as mobile banking and financial technology products.

After almost a year managing Bali Alus’s online business, Citra admitted that she felt hesitant to turn away from technology. She had experienced firsthand the efficiency and benefits from various features in Tokopedia and other e-commerce platforms in terms of stock management, sales mapping, and financial record.

“Now we know which products are demanded by which consumers, and where they are. It’s now become clear, and we know more thanks to technology,” said Citra.

The same goes for Amalia. She is now reconsidering whether Dewa Collection’s offline store will be reopened even after the pandemic ends. “I am rethinking my position about the physical store. I have to spend extra money for rent, but the revenue will be around the same level,” she said.

“Those who are able to utilize technology will be able to expand their business faster and reap more profits amid the pandemic, as what happened in Bali. The increase in Bali’s digital competitiveness, as reported in EV-DCI 2021, is not only due to its huge potential, but also because of the higher digital adoption rate as local businesses adjust to pandemic. Moreover, supporting regulations from Pemda Bali and Bank Indonesia’s successful QRIS implementation program also played a significant role,” said David.