According to the EV-DCI (East Ventures Digital Competitiveness Index) 2021, among the most digitally competitive provinces, the Riau Islands sets itself apart. Compared to the other provinces in the top 10, Riau Islands’ population is minuscule. Its geography also comes into play: around 1.7 million of the province’s residents live in small islands at the outermost part of Indonesia.

However, the Riau Islands successfully broke into the dominance of provinces in Java islands, putting itself in the 7th rank of the most digitally competitive provinces in Indonesia. The Riau Islands is more digitally competitive than Central Java; the centre of economic activity in Eastern Indonesia, South Sulawesi; and the biggest economy in Sumatra island, North Sumatra.

What has allowed the Riau Islands, whose area is composed of 96% water, to have such strong digital competitiveness?

According to the EV-DCI 2021, there are three main factors behind Riau Islands’ digital competitiveness: expenditure allocated to information communication technology (ICT), manpower, and entrepreneurship and productivity.

In the ICT expenditure pillar, one of the strongest indicators from the Riau Islands is the rate of wage for ICT service workers, which scores at 69.4 — far above the median for Indonesia’s provinces at 31.25.

For the manpower pillar, the Riau Islands ranks third nationally when it comes to the ratio of workers in the digitalization-related sectors.

In entrepreneurship and productivity, the Riau Islands’ scores in five indicators that measure the ratio of residents who use the internet at work surpass 50. This is an incredible feat considering the median scores nationwide which range at 13 to 24 for the five indicators.

The three pillars reflect the beginning of a strong digital industry in the Riau Islands. Not only that the industry can attract digital talents, it also affords to offer a higher wage compared to other provinces. Moreover, this digital industry is located in Batam, an island that is merely a 1-hour boat ride away from Singapore. 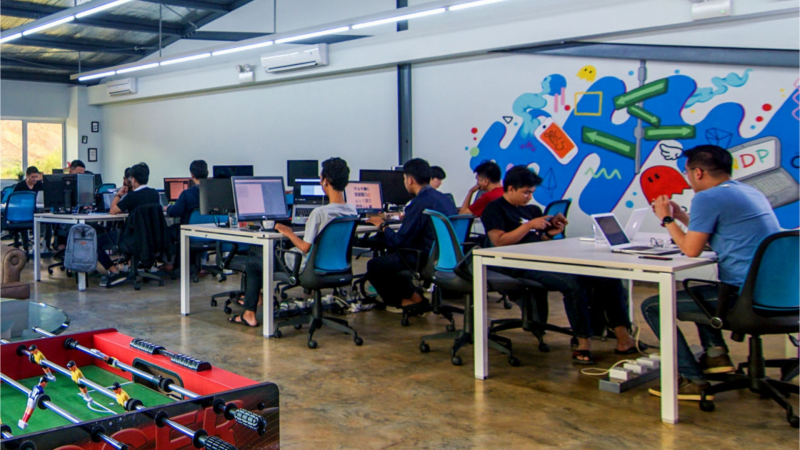 The development of the digital industry in Batam started almost 20 years ago. After graduating from film school and working in the Singaporean film industry, the Director of Nongsa Digital Park and Infinite Studios Mike Wiluan, saw an opportunity to develop a similar industry in Batam. At that time, Singapore had been one of the centres for post-production works for the global film industry, which includes animation and visual effects.

Ever-growing demand resulted in the lack of supply of digital creative workers in Singapore. Aiming to fill the gap with Indonesian talent, Mike started a home production company which would be the embryo of  Infinite Studios in Batam. Infinite Studios grew into a film studio that has been involved in various renowned projects in the film and television industry, such as Crazy Rich Asian, Westworld, and Blackhat.

In the past 20 years, Infinite Studios has attracted thousands of digital and creative workers from across the archipelago to Batam in order to produce content for the global market. The presence of a creative centre in Batam also launched the growth of the local digital ecosystem. Today, up to 30% of digital and creative workers in Infinite Studios come from the Riau Islands. In the next two years, the contribution of local talent is targeted to surpass 50% of the mix.

“Now the youth [around Batam] have access to new gadgets and technology so that they can learn and train faster. There is no more barrier to entry,” said Mike.

Just like the film industry 20 years ago, the development of the digital and technology industry in Singapore has resulted in high demand for digital talent, which cannot be solely fulfilled by the domestic market. With Nongsa Digital Park, the digital ecosystem in Batam is hoped to be able to provide supply for the shortage of digital talent, with a target of 51,600 workers in the next 2 or 3 years.

With development plans and over a 100-hectare land, Nongsa Digital Park aims to provide ease and comfort for hundreds of companies and thousands of digital talents who have to move to Batam through both physical and digital infrastructure for the development of the digital ecosystem in the island.

CEO of Sinarmas Land Michael Widjaja, emphasized that one of the crucial keys for digital ecosystem development is growing an education-based community.

“At Digital Hub [in BSD City, South Tangerang], we started with students and university students. Education centres are important. After a community has been built, an ecosystem will grow along. Companies like Traveloka chose BSD City due to the established ecosystem. This is what we will also do at Nongsa Digital Park,” said Michael.

Mike added that the developer of Nongsa Digital Park had also discussed with various organizations and institutions to build an educational facility, training and vocational centre in order to supply even more talent.

In the East Ventures-Digital Competitiveness Index 2021, Managing Director of Singapore EDB Chng Kai Fong said that there had been around 150 multinational Singapore-based companies with presence at Nongsa Digital Park. These companies employed more than 1,000 tech developers and creative industry players.

“This region allows Singapore-based companies to develop their services and products by leveraging the talent of the tech-savvy and dynamic young generation in Indonesia. In addition, with the existence of the NDP, Indonesians can take advantage of the job openings at tech startups and multinational companies that previously made Singapore their home,” said Chng Kai Fong.

According to Mike Wiluan, the presence of Singaporean companies in Batam is only the beginning. Jakarta-based tech companies have also started considering Nongsa Digital Park as their office. The geographical proximity of Batam and Singapore does not only give them access to global talents and sophisticated technology, but also allows them to connect with hundreds of venture capital firms with offices in the global financial centre.

After the digital talent has been nurtured and flourished into a digital ecosystem, according to Mike, the rise of new startups is only a matter of time.

“This [Nongsa Digital Park] is an opportunity to pool all the strengths that we have in one place. There’s talent, there’s infrastructure, there’s proof of concept, and also political will,” said Mike.

According to Operating Partner at East Ventures David Fernando Audy, “Hundreds of technology companies from Singapore have opened offices in the Nongsa Digital Park which is located on Indonesia-Singapore border, and employ many technology talents from all over Indonesia. Here there is collaboration between 2 countries. Singapore provides demand while Indonesia provides a supply of technology talents. Many technology workers who live in Riau Islands have also had a positive impact on increasing the use of technology and adoption of the internet in the surrounding community. It is the main reason why Riau Islands’ EV-DCI rank and score shot up to the top 10.”