Skip to content
The silver lining in the proptech sector
Back The silver lining in the proptech sector

We recently announced two new portfolio investments in property technology (Proptech) startups: AMODA – a prefabricated construction company; and Tanaku – a rent-to-own property tech company. Both startups are operating and localizing their solutions to serve Indonesia-specific markets. Their recent funding rounds are seed and pre-seed, both led by East Ventures.

Indonesia’s proptech platforms rarely seem popular as the property market has experienced a downturn in the past few years. COVID-19 pandemic contracted the industry in 2020.

The central bank (Bank Indonesia or BI) data recorded, that the demand for commercial property indicated a slowdown. The commercial property demand index recorded a slowdown of 0.21% QoQ in Q1 2022 compared to 0.91% QoQ in the previous quarter. In terms of segment, the slowing demand in terms of office space sales in some cities such as Jakarta, Semarang, and Surabaya. Moreover, in terms of rentals, the decrease in demand happened in hotels, convention halls, offices and apartment rentals due to the rise of COVID-19 in Q1 2022.

However, we have seen a leading indicator of the recovery since last year. The indicator suggested a rise in consumer spending both online and offline. The same data from BI recorded that the demand for the retail segment showed a positive signal since Q4 2021, aligned with the opening of new retails in some cities in Indonesia, including in the capital city Jakarta and Banten.

These are our following thesis in two new proptech portfolios:

Amid the economic recovery from the COVID-19 pandemic, many small and medium enterprises (SMEs) have started to open their new retail stores and complement their traction in the online channel. It would support the branding and awareness, attract new customers, and potentially translate to higher sales by the end.

To support the needs, they would need a simple, strategic, and affordable building construction on top of the strategic location. Those three traits could be offered through the prefabricated and modular structure, which is already common in developed countries. AMODA, is a prefabricated and modular technology that would revolutionize the construction process in commercial space. It can potentially serve more use cases following the development of prefabrication in the country. Founded by Robin Yovianto and Agusti Salman Farizi, AMODA provides building solutions that cater to the needs of individuals and businesses, from SMEs and high growth to large enterprises. The building is flexible and efficient, as it can be moved and expanded as needed. Therefore, anyone starting a business will have a better solution and lower risk, as they can do trial and error and move from one location to another without having to spend renovation costs constantly. 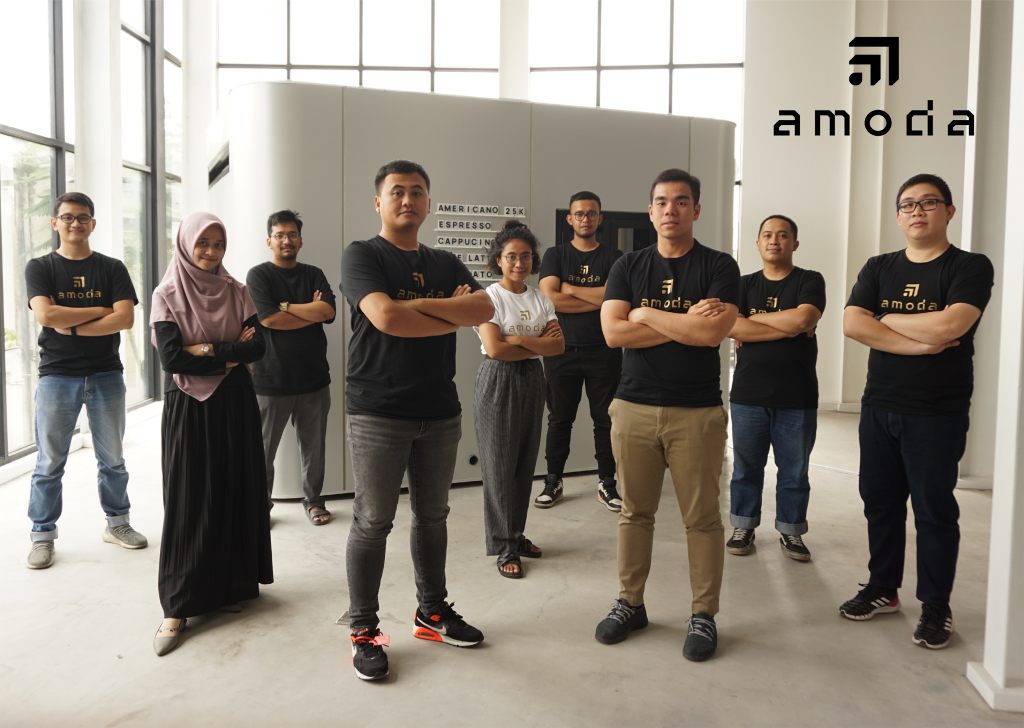 So far, the company has engaged with some prominent clients, such as the state railway operator PT Kereta Api Indonesia (KAI), the Flavor Bliss Alam Sutera, Kumulo, and a startup firm Feedloop.

In the consumer property sector, a few companies have offered solutions targeting the property owner, such as a discovery platform, the short and long-term stay operator, a property aggregator, and others. Unfortunately, to transform the property industry, the current solutions offered to address the problem of the homebuyer have not been adequate.

For instance, a particular problem is currently happening in Indonesia’s housing market. It is like a chicken and egg situation; while the government targets increasing the number of households occupying their own houses, the demand for houses is still limited.

One of the reasons that consumers are reluctant to buy a property is the difficulty in paying the down payment, according to several surveys from a mortgage-focused state lender, Bank Tabungan Negara (BTN) and PropertyGuru. Although the government offers a zero percent down payment program, the requirement is limited to the first house no bigger than 21 meters square. Meanwhile, the 10%-20% of the average down payment for purchasing a property is relatively incriminating for some people.

The situation led to the decline of homeownership in Indonesia, which has declined by 2% each year, since 2000. About 70 million millennials are the most impacted segment, with 70% unable to afford their own home.

The problem stems from how the home needs to be purchased. Many millennials do not have ample funds saved for the initial down payment, and banks reject the majority when applying for a mortgage. Property developers often offer installment plans, but they come with expensive hidden fees. This leaves millennials frustrated and resorting to long-term rentals, causing a steady decline in homeownership.

At the same time, Indonesia’s housing backlog reached 12.7 million households in 2021, according to a Central Bureau of Statistics (BPS) survey. Responding to that, the government targets an increase in families occupying decent houses from 56.7 percent to 70% or 11 million households until 2024.

In addition, a BI survey stated that the mortgage is still the primary option for buying a residential property in Q1 2022. Addressing this problem, Tanaku lands the consumers’ pain point for having their house by offering a financing solution with a low down payment, starting from 2%. Tanaku’s prospects might be too early to conclude, yet we have seen a few successful playbooks implemented in the United States and other developed countries. Reflecting on various business models of more established proptech players, we believe, Tanaku will be the solution to reducing the housing backlogs and helping more people have easier access to own a property. Furthermore, the firm can offer more complete solutions in the near future.

Collaborating with a property developer, Tanaku has a soft-launched offering of some property units to be sold in Jakarta in 2022. The soft launches could enhance the customers’ residences without worrying about the high upfront costs.

Lied on these two theses: the robustness of consumer spending, both in the retail segment, and the intense eagerness to buy a property for first-time home buyers for residential, East Ventures believes that we can support our early portfolio startups to revolutionize the property landscape and pain points in Indonesia.