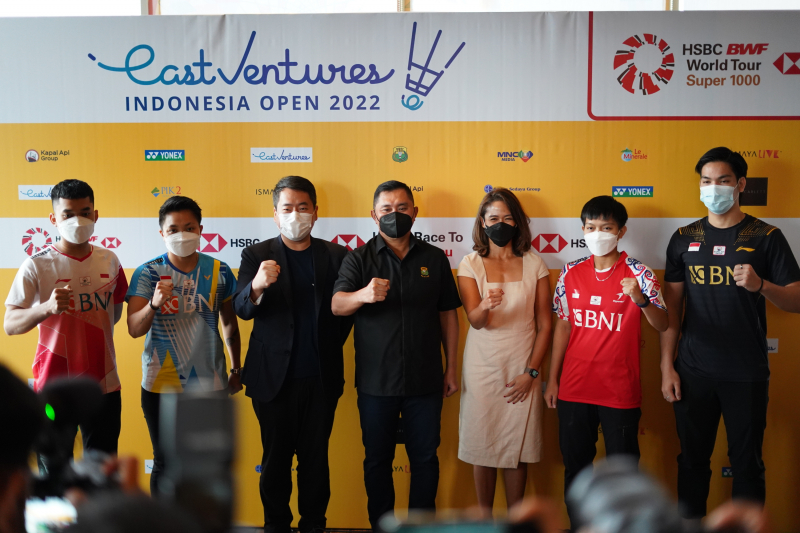 East Ventures, a leading sector-agnostic venture capital firm and pioneering startup investment in Indonesia, marked a new history for the world of Indonesian badminton; as the firm appeared for the first time as the main sponsor of the most prestigious badminton tournament in the country, the Indonesia Open. The title of the tournament is East Ventures Indonesia Open 2022.

East Ventures Indonesia Open 2022 tournament is categorized as the highest level of the BWF World Tour Super 1000. The biggest and most prestigious championship will be held at Istora Gelora Bung Karno, Senayan, Jakarta, 14 – 19 June 2022.

The presence of East Ventures as a new sponsor on the Indonesian badminton stage certainly gives a new color, enthusiasm, and pride.

“We are proud to be able to support the badminton tournament which is held annually by the Badminton Association of Indonesia. Through the East Ventures Indonesia Open 2022 tournament, we hope to support the enthusiasm and development of badminton sports achievements in Indonesia, and we wish this international sport activity to run smoothly,” said Roderick Purwana, Managing Partner of East Ventures, at the championship press conference at SKYE, Central Jakarta.

According to Roderick, East Ventures continues to support the growth of Indonesia as a whole from various aspects/industries, including in the sports sector. This is accomplished by becoming the main sponsor of a badminton tournament titled East Ventures Indonesia Open 2022 to support the spirit and progress of badminton sports achievements in the country.

“As a venture capital firm, East Ventures believes that investing and playing badminton share the same philosophy and values that make us proud to actively support the biggest badminton tournament in the country. Both badminton players and investors need intuition in making a move. It is also combined with strength, endurance, agility, speed, and thoroughness in achieving the best results. The philosophy within badminton matches is in line and in harmony with East Ventures’ philosophy,” said Roderick.

Meanwhile, according to the Secretary General of PP PBSI Muhammad Fadil Imran, the involvement of East Ventures by becoming the main sponsor of the Indonesia Open 2022 tournament should be welcomed positively. It gives a new color and a new spirit to badminton in the country.

“Thank you,  East Ventures for making history and adding new colors to the badminton scene by becoming the main sponsor of the East Ventures Indonesia Open 2022 tournament. This deserves appreciation because the company has directly participated in maintaining the dignity and supremacy of Indonesian badminton on the world stage,” said Fadil Imran.

“The presence of East Ventures as the main sponsor of the Indonesia Open 2022 shows that Indonesian badminton has always been an attraction for the business world, with its world achievements and direct involvement of East Ventures in developing the sport in the country. This is also in line with the vision of our mission is to bring Indonesian badminton not only as an outstanding sport but also as an industry,” added Fadil Imran.

Fadil Imran said the championship, which provides a total prize of US$ 1,200,000 or around IDR 17.6 billion, is ready to be attended by all the world’s top and star players. Only the players who are ranked in the top 32 in the world will appear and compete to become champions.

Seeing the names of the players present, this tournament will be intriguing. All the world’s top badminton players will join and enliven the competition. From the early stages, there will be interesting and exciting matches from world-class players.

The guest players will compete fiercely against the home heroes who will also go down in full strength. Indonesian mainstay names, such as Anthony Sinisuka Ginting, Jonatan Christie, Shesar Hiren Rhustavito, Hendra Setiawan/Mohammad Ahsan, Fajar Alfian/Muhammad Rian Ardianto. In addition, there will be the world’s number one double, Marcus Fernaldi Gideon/Kevin Sanjaya Sukamuljo who will be ready to appear in action again.

“In addition, the return of the audience to the arena along with the slowing down of the COVID-19 pandemic will certainly add to the liveliness of the tournament. The longing of the audience will also be cured. The enthusiasm and spirit of badminton lovers in supporting their favorite players will certainly restore the atmosphere of Istora GBK which is always excited, lively, and full of excitement, an atmosphere that has never existed anywhere else. This atmosphere is what world players who come to Jakarta will always miss,” added Fadil Imran.

For more clear and complete information, please follow the news on all PBSI social media accounts.

Here are the price tickets for East Ventures Indonesia Open 2022: