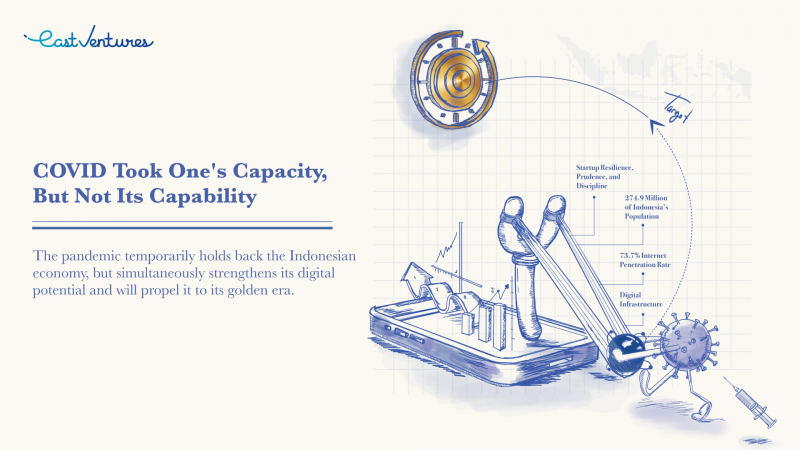 Indonesia’s digital economy to slingshot into its golden era

Taking a slingshot as an analogy, Indonesia’s digital economy is the rock that is being pulled back by the COVID-19.

Let’s imagine a slingshot. In a slingshot, there are three main components: the rock that will be propelled forward, the force that pulls the rock back before its launch, and the rubber on the slingshot. Of course, you also have to have the target for the slingshot itself.

Taking a slingshot as an analogy, Indonesia’s digital economy is the rock that is being pulled back by the COVID-19. However, as with the draw in a slingshot, it is the backward pull that will give Indonesia’s digital economy the power for its future trajectory. In its current position, the rock seems to be farther from the target compared to before the pullback, and yet, without the pull, it is impossible for the rock to move forward. The same thing applies for Indonesia’s digital economy: it might look like it is in a disadvantaged position, but it is actually harnessing more capital to launch forward to its golden era. Forged by the crisis, the digital infrastructure itself and the players in startup ecosystem are well-positioned. However, we should not forget that the rubber cannot be stretched out too far or too long as it can break, hence the urgency to keep the pandemic under control lest we lose the momentum altogether.

Two sides of the COVID-19 crisis

The COVID-19 pandemic dawned an unprecedented, global health crisis. The spillover from this pandemic has caused entire economies to go into recession, experience skyrocketing levels of unemployment and filled the world with fear and grief. On the other hand, the pandemic also brought about swift digital transformation in many countries.

Under the umbrella of the COVID-19 narrative, Indonesia’s digital economy passed two significant milestones in 2020, undergirding the hope for what is ahead. Due to the nature of the virus, every high-touch and high-risk activity was forced to move online. This adaptation has affected and shaped both business and consumer behaviors.

The first milestone is the rate of internet penetration in Indonesia. According to a nationwide survey by the Indonesian Internet Providers Association (APJII), Indonesia’s internet penetration rate hit 73.7 percent this past year, which is equivalent to 196.7 million users. Second is the influx of 25 million new digital consumers in Indonesia, who had to go online to fulfill their daily needs due to the physical distancing policies set in place amidst the pandemic.

These two facts show that the ecosystem is maturing and the need for internet education has diminished. Everyone has a digital device now and just about everything is online. In other words, the digital ecosystem in Indonesia is ripe – it is a good time to monetize.

Despite the digital transformation, however, not every startup could thrive in the pandemic. The lessons of the pandemic for startups had to be learned the hard way. In times of crisis, there is no margin of error, forcing startup companies to be prudent, disciplined and resilient. Nonetheless, the companies who survived or thrived during the turbulent times in 2020 will definitely come back stronger and grow even faster.

COVID-19 as a draw before the launch

The rapid digitization in the country has boosted Indonesia’s capability and has successfully prepared the country to reap more benefits from the digital economy later on. The valuation of Sea shows that it is possible for Southeast Asian companies to become hectacorns. As the biggest market in the region, Indonesian startups certainly will be able to reach that US$ 100+ billion valuation as well.

East Ventures believes that COVID-19 is merely holding us back for a time so that as a nation, we can propel faster and stronger in the near future. Once the virus is under control, Indonesia’s digital economy will be ready to slingshot towards its golden era.

The best time to invest in Indonesia is now.

By Willson Cuaca, Co-founder and Managing Partner at East Ventures