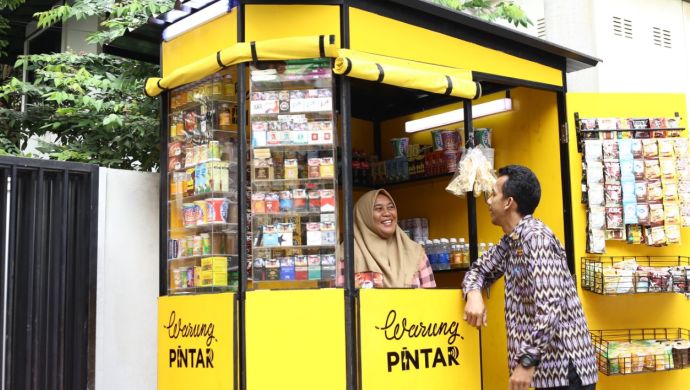 “Warung” or small street kiosks are typically owned and operated by small business owners. Existing in almost every street corner in every Indonesian cities and villages, warungs provide daily necessities from bread, soap, to cigarettes.

However, as described by Warung Pintar COO Harya Putra in a press statement, warung is more than just a place to shop. It also serves as a “local community centre” where customers meet to hangout, charge their smartphones, have coffee, and even watch football match together.

The new project wants to take warungs to the digital era by implementing blockchain, big data analysis, and IoT.

In addition to shopping for daily necessities from soap to cigarette, Warung Pintar also allows customers to do online transactions such as purchasing airline tickets or phone credits. It also has a digitised bookkeeping, warehousing, distribution process, and cash register system.

All the technologies used in every warung is supplied by East Ventures’ portfolio companies such as Moka POS, Jurnal, Kudo, Do-Cart, and Waresix.

It implements a partnership model with warung owners, requiring them to provide “commitment, honesty, and time to fix up the warung as needed.”

The project has operated up to eight outlets in Greater Jakarta Area by far.

“While the adoption of digital platforms by consumers and merchants is gaining fast momentum in Indonesia, we do notice that there is a certain segment of society that has no such privilege due to their overall lack of exposure to the digital world,” said East Ventures Managing Partner Willson Cuaca.

“Warung Pintar has taken a different approach to serving this unprivileged segment, not only by providing them with digital platforms but also by building a physical presence for them to operate. We build end-to-end solutions, including finding the land, financing, merchandising, and marketing. Warung Pintar is Indonesia’s answer to ‘new retailer’,” he added.

The Warung Pintar core team is led by CEO Agung Bezharie, who was an investment associate at East Ventures.

Its tech team features prominent names in the local startup community, such as Sofian Hadiwijaya, who has had leadership positions at Kudo, Pinjam.co.id, and Go-Jek.

Pandu Kartika Putra, founder of Code for Bandung and manager of Code4Nation movements and former civic projects associate at East Ventures, also participated in the team.

Last September, it launched a US$30 million fund for Southeast Asian startups with a focus in Indonesian market.

In Asia, tech giants such as Alibaba has been following the footsteps of Amazon by opening Hema, a digital-first hypermarket chain.

Its competitor Tencent has also purchased a stake in China’s largest supermarket chain Yonghui Supermarkets as part of its effort to embrace New Retail.